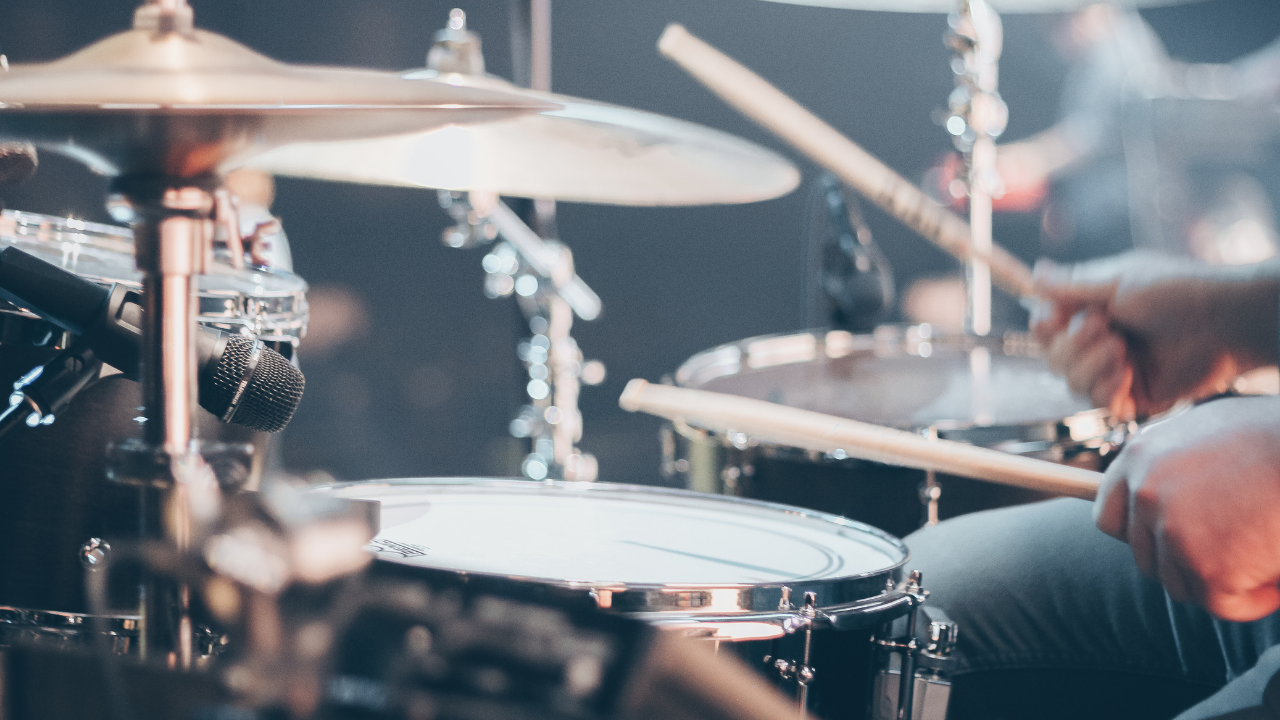 It can be difficult and time-consuming to achieve a pro-quality drum sound in a home studio. And even if you spend the money to go to a nice professional space, you still have to worry about either performing the part yourself, or directing another player to deliver the performance you’re looking for…

Meanwhile, your DAW offers you the ability to program a relatively realistic drum part exactly how you want it from the comfort of your home studio in a matter of minutes. And on top of that, most non-musician listeners can’t tell the difference between live and programmed drums anyway.

In this article I’ll share with you how to know which path to take when it comes to drums. Additionally, I’ll share some drum tips and best practices so you can get a great drum track, no matter which path you take.

When considering whether or not you should record live drums for your project, there is one essential thing to keep in mind: If you can’t do it well, then it’s not worth it.

​            Because as cool and awesome live drums are, poorly produced drums will ruin a production. If you end up with drums that were played by an under-rehearsed drummer, on a kit that sounds like trash, recorded poorly with the wrong mics in a room that sounds awful, and that is entirely unedited… then, boy, do you have a terrible foundation for your song. At that point, you’ll have no choice to start over.

​            Well, almost. There are a few other factors worth considering when you’re making your decision. But rather than try to unpack it with a big long-winded explanation, I’ve created this handy little decision-making flowchart! Let’s look at it together and then below the flow-chart, I’ll clarify a few things... 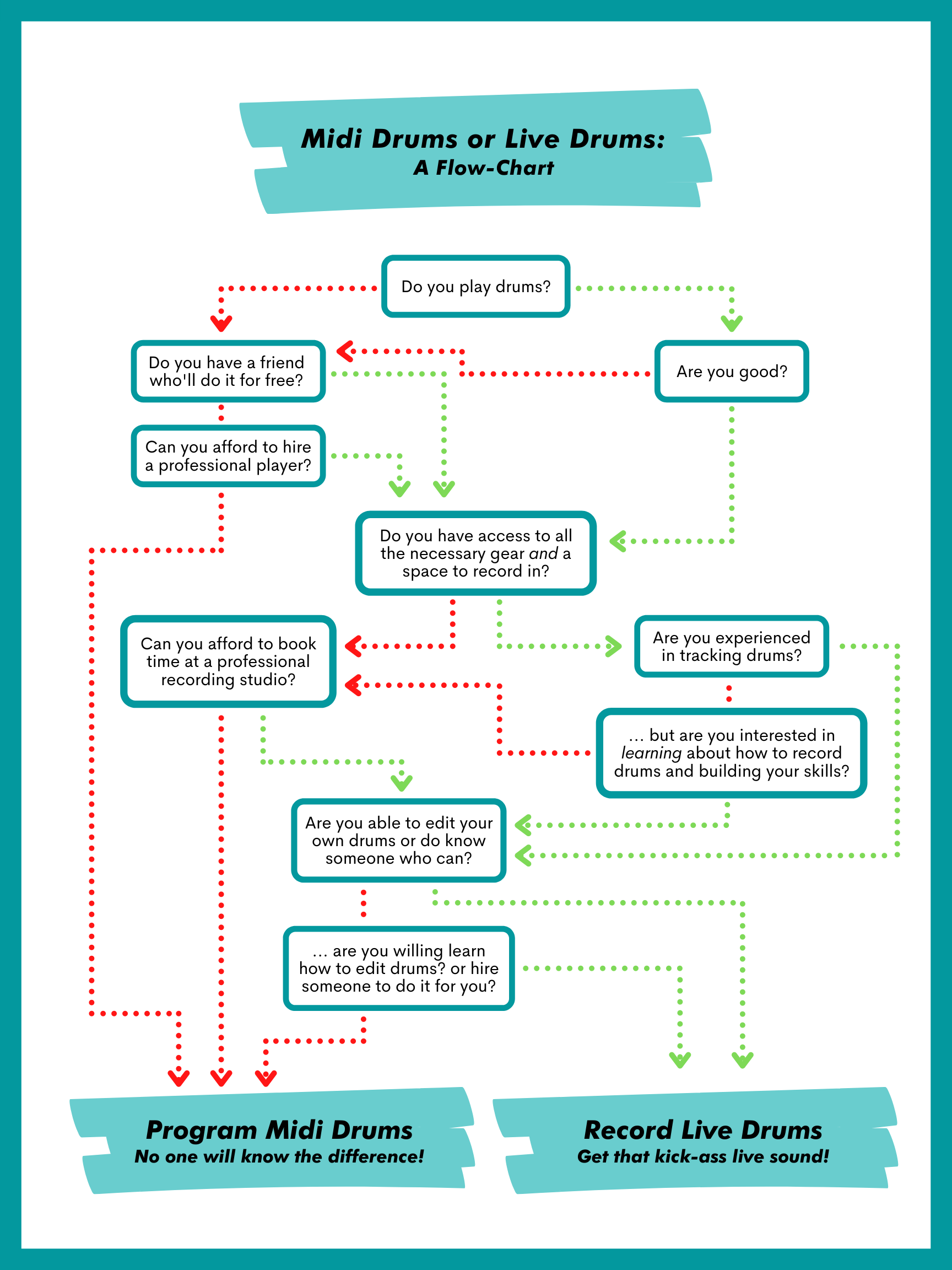 Alright! Most of that flow-chart is pretty intuitive - you need to record a good drummer in a nice sounding space with all the necessary gear...

​            But the one consistent point of confusion is regarding the final consideration: Drum Editing. Specifically, ‘Are you able to edit your own drums or do you know someone who can?’

​            While I’m not advocating to hard-snap every single hit to the grid and suck the life out of the performance, it’s important to be able to tidy up the drum tracks. You need to be able to move out-of-time hits - especially for the moments when the performance is awesome but the timing is a bit off. And, importantly, you need to clean up your drums before you track the rest of the instrumentation so you’re recording over what will already be the final drum part.

​            Because the reality is this: consistently rushing or dragging drums don’t create a cool “live” feeling that your listeners will admire; they’re distracting and they make your music sound amateur. Contemporary listeners are used to edited drums, that’s what they’ve come to expect. So if you have ambitions to create commercially-competitive music, you must be willing to edit your raw drums to at least some degree.

​            Still, if you consider yourself a purist and any drum editing is blasphemous, I suggest that you skip recording in a studio altogether and release your next project as a live-performance recording. Book a show at a nice venue, pay the live sound engineer a modest fee to record the live stems for you, and then release that. You’ll get the truest “live” version of your music and produce an album in a single day rather than over weeks in a studio.

Should you decide that live drums are the way to go, here are a few best practices and tips on how to get the most out of your session...

Rehearse, then Rehearse some more. The studio is not the place to figure out the part - you need to show up and execute the plan. Make sure you, or the drummer, has a clear plan of exactly what they’re gonna play when it’s time to record so you can focus on the sound of the drums and not the part. And if there are some lingering question marks about some moments, identify them ahead of time and plan according.

Kick, Snare, and Stereo Overheads. There are countless ways to record a drum kit - almost as many ways as there are engineers. But most can agree that independent of how you mic the kit or what mics you use, the essential elements to capture are: kick, snare, and a stereo pair of overhead or room mics. Again, there are endless ways to do that, and a lot more you could do, but make sure your bases are covered. Don’t leave without a great kick sound, a great snare sound, and a great stereo recording of the kit as a whole.

Edit during the session. After you finish recording, and before you breakdown the session, do some basic editing right then and there. You want to ensure that you indeed do have the part all there before you move any mics, as it will be impossible to recreate the setup and sound if you discover that you’re missing a section later. You don’t need to comprehensively quantize, but comp together the large chunks of the song and make sure you’ve got it before wrapping up.

Making the Most of

Should you decide that programming midi drums are the best course of action, here are a few ways to turn lifeless midi into exciting, realistic-sounding drums...

Avoid drum loops. Though it may be tempting to just fly in some pre-built drum loop from some library, taking the time to “play” an edit original arrangement will yield a more life-like drum sound. If you’re unfamiliar with how to write a midi drum part, you can use pre-built loops as inspiration. Alternatively, in most cases, you can begin by simply placing a kick hit on the “1” of every measure and a snare hit on the “3” of every measure and build out from there.

Micro-adjust your timing. After you finish writing and programming the drum part, quantize your drums, or lock all of your hits to the grid of the session. Then, go back and selectively micro-adjust some hits off the grid to add a human-like feel. More than anything, micro-adjusting your high hats to be slightly behind the beat will create a sense of groove and swing.

Write Velocity by hand. Once you solidified your timing and arrangement, comb through and adjust the velocity of all the midi hits. Velocity is the measure of an individual midi hit’s dynamic level. More velocity, more loudness and impact. And because a real human drummer doesn’t hit the drums with the exact same degree of force every single time, you’re midi drummer shouldn’t either. Go through and subtly adjusting the velocity of each hit, following the natural flow of the song’s arrangement, to achieve a more realistic sound.

Create layers. When it comes to drum tone, feel free to create layers of multiple drum samples to achieve the sound you’re going for. If your midi snare sounds a little too thuddy and lacks a good “crack”, for example, layer a thinner/brighter snare underneath your main one.

Alternatively, It’s okay to make it sound “fake”. Depending on your genre, it might not be necessary to simulate a “live” feeling in your drum part. If that’s the case, it’s okay to deliberately make your drums sound like they’re fake, like it’s a drum machine. Skip all the micro-adjusting of your timing and velocity, lock everything to the grid and focus on building the coolest, most high-impact drum sounds you can.

I hope this article helped you make your decision about how to move forward with drums! If anything was unclear, or if you'd like a second opinion about your project, email me directly at [email protected] 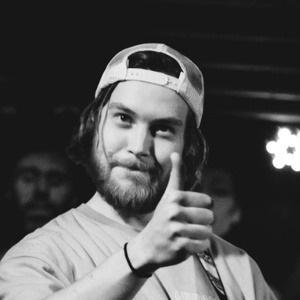 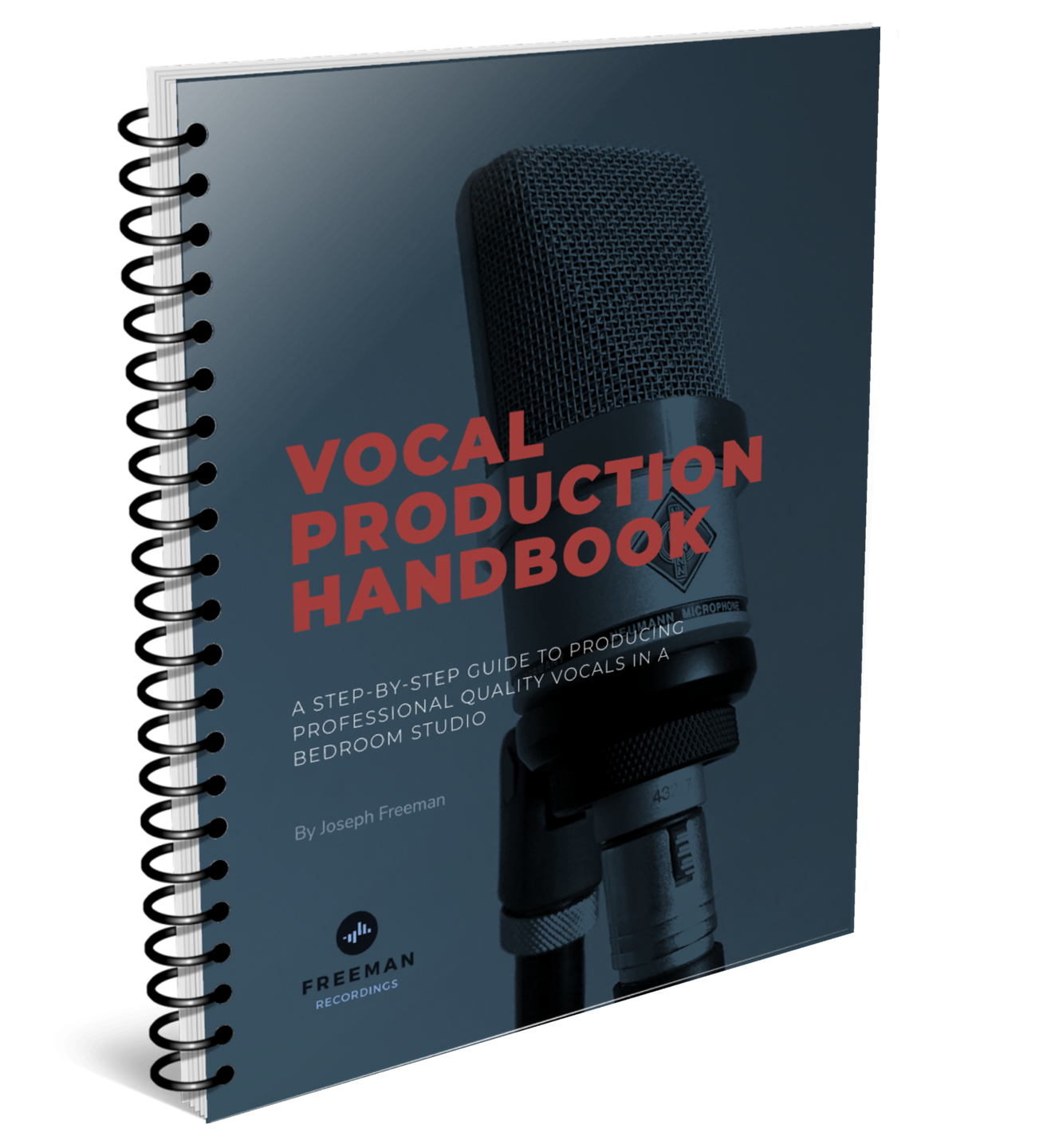